Media Release from The University of Sydney

Starchy carbohydrates were a major factor in the evolution of the human brain, according to a new study co-authored by researchers from the University of Sydney’s Charles Perkins Centre and Faculty of Agriculture and Environment. Published in the Quarterly Review of Biology, the hypothesis challenges the long-standing belief that the increase in size of the human brain around 800,000 years ago was the result of increased meat consumption. The research is a blow to advocates of the Paleo diet, which shuns starch-rich vegetables and grains. “Global increases in obesity and diet-related metabolic diseases have led to enormous interest in ancestral or ‘Palaeolithic’ diets,” said Professor Jennie Brand-Miller from the Charles Perkins Centre, who co-authored the research with Professor Les Copeland from the University of Sydney’s Faculty of Agriculture and Environment and international colleagues. “Up until now, there has been a heavy focus on the role of animal protein in the development of the human brain over the last two million years. The importance of carbohydrate, particularly in the form of starch-rich plant foods, has been largely overlooked. Our research suggests that dietary carbohydrates, along with meat, were essential for the evolution of modern big-brained humans.” “The evidence suggests that Palaeolithic humans would not have evolved on today’s ‘Paleo’ diet.” According to the researchers, the high glucose demands required for the development of modern humans’ large brains would not have been met on a low carbohydrate diet. The human brain uses up to 25 per cent of the body’s energy budget and up to 60 per cent of blood glucose. Human pregnancy and lactation, in particular, place additional demands on the body’s glucose budget, along with increased body size and the need for mobility and dietary flexibility. Starches would have been readily available to early human populations in the form of tubers, seeds and some fruits and nuts. But it was only with the advent of cooking that such foods became more easily digested, leading to “transformational” changes in human evolution, said co-author Professor Les Copeland. 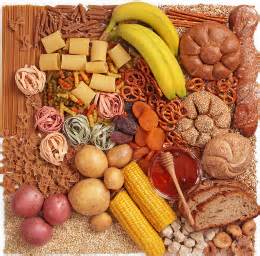 “Cooking starchy foods was central to the dietary change that triggered and sustained the growth of the human brain,” Professor Copeland said. (Or in simple terms: Starchy carbs, not a Paleo diet, advanced the human race) Researchers also point to evidence in salivary amylase genes, which increase the amount of salivary enzymes produced to digest starch. While modern humans have on average six copies of salivary amylase genes, other primates have only an average of two. The exact point at which salivary amylase genes multiplied is uncertain, but genetic evidence suggests it occurred in the last million years, around the same time that cooking became a common practice. “After cooking became widespread, starch digestion advanced and became the source of preformed dietary glucose that permitted the acceleration in brain size,” Professor Copeland said. “In terms of energy supplied to an increasingly large brain, increased starch consumption may have provided a substantial evolutionary advantage.”Co-author Karen Hardy, a researcher with the Catalan Institution for Research and Advanced Studies at the Universitat Autònoma de Barcelona, said: “We believe that while meat was important, brain growth is less likely to have happened without the energy obtained from carbohydrates. While cooking has also been proposed as contributing to early brain development, cooking carbohydrates only makes sense if the body has the enzymic equipment to process these.”According to the researchers, a diet similar to that which gave us our large brains in the Palaeolithic era would be positive for human health. However, unlike the modern Paleo diet, that diet should include underground starchy foods such as potatoes, taro, yams and sweet potatoes, as well as more recently introduced starchy grains like wheat, rye, barley, corn, oats, quinoa and millet. “It is clear that our physiology should be optimised to the diet we experienced in our evolutionary past,” Professor Brand-Miller said. “Eating meat may have kickstarted the evolution of bigger brains, but cooked starchy foods, together with more salivary amylase genes, made us smarter still.” The study was co-authored with international researchers Dr Karen Hardy (Universitat Autònoma de Barcelona) and Professor Mark Thomas and Katherine Brown (University College London).