In the 1970s, when we were in school, food allergies were rare. But Australian children now have the highest rate of food allergy in the world. Up to 1 in 10 infant and 2 in 10 school-aged children have a proven food allergy. 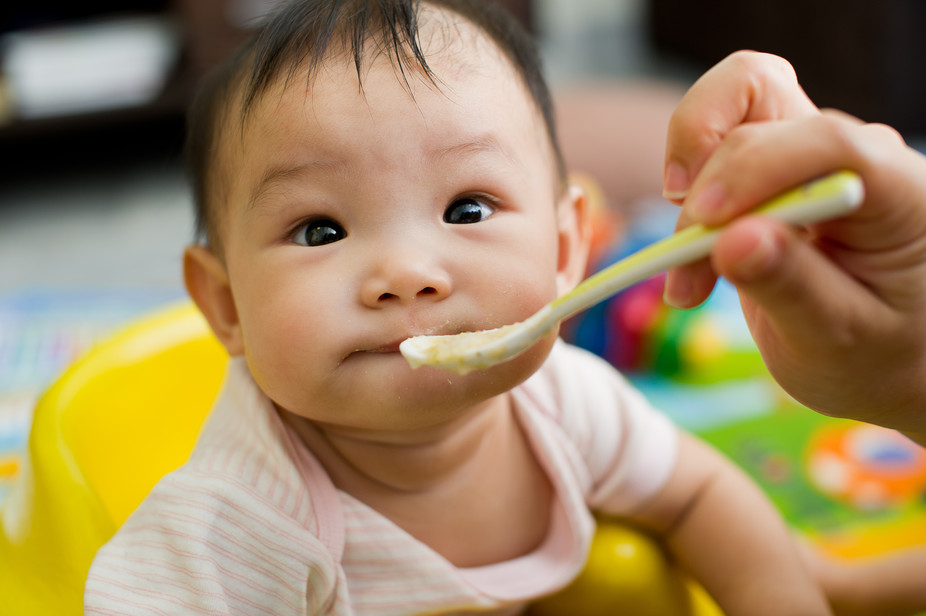 In the 14 years to 2012, there was a 50% increase in hospital visits for anaphylaxis, the most severe allergic reaction. Infants and toddlers accounted for much of this increase.

New research in the Journal of the American Medical Association (JAMA) shows the early introduction of egg (from four to six months) and peanuts (from four to 11 months) is linked to lower rates of egg and peanut allergy.

The researchers analysed the combined results of trials investigating whether food allergens in babies’ diets prevent the development of allergies to these foods. They concluded there was “moderate” certainty that early introduction of egg or peanut was associated with lower risks of egg and peanut allergy.

They also found that early introduction of gluten (wheat) was not associated with an increased risk of coeliac disease.

The researchers used the term “moderate certainty” because the review is based on a mix of studies with different designs and of varying quality. Feeding studies can also be difficult to “blind”; for some studies participants and researchers knew who was given egg or peanut, so were open to some bias.

As a result, the authors say more work needs to be done to better understand the precise optimal timing for introducing eggs and peanuts.

Nonetheless, these findings affirm the recently updated Australian infant feeding consensus guidelines. These state that when parents introduce solids – at around six months but not before four months – they should also introduce previously avoided foods such as peanut and egg. This should occur in the baby’s first year of life.

The problem is, there have been so many changes to guidelines over the last few decades that parents are no longer sure what to believe.

In Australia, dietary recommendations aiming to reduce the risk of food allergies began to appear in the early 1990s. They recommended infants avoid certain foods such as egg and peanut. These guidelines were largely based on outcomes of trials focusing on the mother avoiding allergens during pregnancy and while breastfeeding.

In 2008, a number of research projects (including our own) questioned whether these older studies were flawed because they had not adequately adjusted the results to account for the fact that those with a family history of allergies adhere to recommendations better than those without, thus biasing the result.

These new studies accounted for this fact. We found, paradoxically, that earlier introduction of foods such as egg and peanut, at around six months, appeared to protect against food allergy. This has resulted in a complete rethink in our approach to preventing food allergy.

(Note that these findings relate to the prevention of food allergies, not the management, which remains unchanged. Children with food allergies should continue to avoid those foods.)

Based on this research, feeding guidelines began stating that earlier introduction did not increase the risk of food allergy and may indeed be protective.

These recommendations were strengthened this year after research trials tested the effect of eating common allergens (in particular, peanut) in the first year of life compared with completely avoiding them. The guidelines now recommend that exposure to egg, peanut and other foods frequently associated with food allergy should occur in the first year of life to offer protection.

It’s still not clear if this approach alone will prevent the whole food allergy epidemic. Some children will still develop food allergies despite following the feeding guidelines.

We know the tendency to develop allergic disease is inherited, but environmental factors, including the microbiome, vitamin D levels, migration effects, the number of siblings and exposure to pets also all appear to play influential roles, as does the presence of early onset eczema. Research trials are investigating the role these factors play in the development of food allergy risk.

In the meantime, experts agree there appears to be a window of opportunity in the first year of life where exposure to foods such as peanut and egg decreases the risk of allergy to these foods. Diet diversity remains an important part of a healthy diet.

For the most recent infant feeding guidelines and information about introducing solid foods to infants, visit the Australasian Society of Clinical Immunology and Allergy website.